In addition to authoring a biography of silent screen vamp Barbara La Marr (entitled Barbara La Marr: The Girl Who Was Too Beautiful for Hollywood, and available on Amazon and the University Press of Kentucky's website), hosting a tribute website (www.barbaralamarr.net), and frequently lecturing about Barbara, I regularly portray Barbara in a one-woman performance piece that I wrote about her incredible life. (See Performance Dates below.)

One of early Hollywood's first major stars and s ex sirens, Barbara La Marr was a celebrated dancer, an acclaimed vaudevillian, a highly talented screenwriter, and an accomplished actress. She lived passionately and with abandon before dying of tuberculosis and nephritis at age twenty-nine in 1926. A few of the many highlights of her life include:

* Being sent out of Los Angeles and back to her parents at age seventeen because juvenile authorities deemed her "too beautiful" to be on the loose in a big city.

* Achieving renown as a dancer in some of the nation's foremost cabarets and on Broadway during the height of the pre-WWI dance craze.

* Acting roles in twenty-six (credited) films, including The Three Musketeers (1921) with Douglas Fairbanks,
The Prisoner of Zenda (1922) with Ramon Novarro, The Eternal City (1923), and The Shooting of Dan McGrew (1924).

* Giving birth to a son while separated from one of her many husbands and masquerading as the boy's adoptive mother to avoid losing her career to scandal.

I originally performed as Barbara in the Pasadena Playhouse and Pasadena Museum of History production, Channeling Hollywood (the production centered on the life stories of five famous figures [each actor wrote their character's part]). I adapted my Channeling Hollywood performance into my abovementioned one-woman show and perform it in various venues, including Hollywood's Egyptian Theatre and Hollywood Forever.

*** (To schedule an event involving a presentation of my one-woman, self-authored Barbara La Marr performance, a lecture, and a book signing of my biography, Barbara La Marr: The Girl Who Was Too Beautiful for Hollywood, feel free to contact me directly via the contact tab at the top of the page.)

March 25, 2023, at the Mark Taper Forum (Los Angeles Public Library) in honor of Women's History Month - Silent screen actress Barbara La Marr was a legend in her time, leading an astounding life described by newspapers of the day as "a wilder story than she ever helped to film." Join me as I portray Barbara in a self-authored performance piece, then present a slideshow lecture about her, detailing her oftentimes scandalous life from her humble beginnings to her tragic death at age twenty-nine in 1926. Barbara's banishment from Los Angeles at age seventeen for being "too beautiful"; her notable careers as a dancer, a vaudevillian, a screenwriter, and an actress; her impact upon cinematic history; and her fierce determination to forge her own destiny amid the constant threat of losing it all to scandal and, ultimately, death will be spotlighted. A question-and-answer session and book signing will follow the performance and lecture (a limited number of books will be available for purchase, cash only). The event, beginning at 2 p.m. and roughly an hour and ten minutes long, is FREE to attend. Additional details are coming soon. 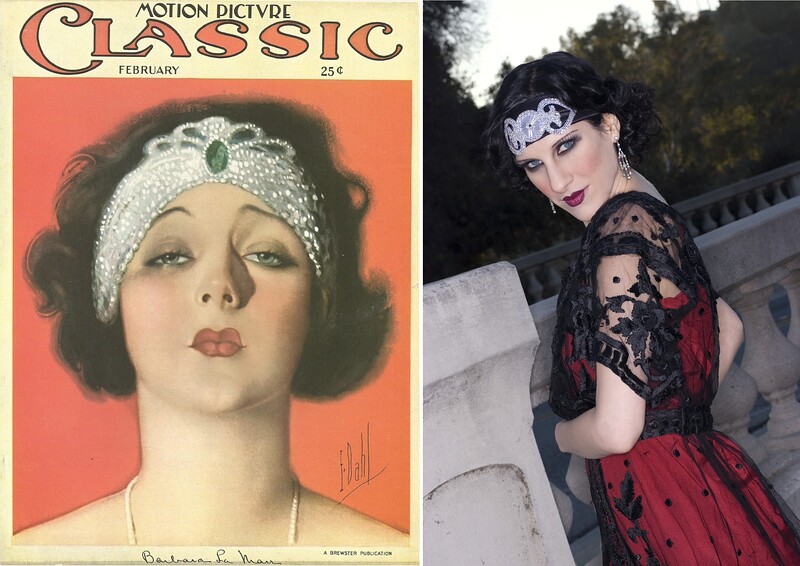 (Photo: Barbara La Marr [on left] and me as Barbara)

COMMENTARY ON THE SHOW -

*" In regards to the Barbara La Marr show as performed by Sherri Snyder, I have had the privilege of seeing it on several different occasions. I was amazed and thrilled to see this very beautiful and talented young woman step back in time to recapture the tempestuous life of my mother during the silent days of Hollywood." ---Donald Gallery (aka Marvin Carville La Marr)

*"I wanted to thank you again for your fabulous portrayal of Barbara LaMarr today at Hollywood Forever. You captivated the tour goers. The performance was truly riveting as you unveiled the drama behind the woman. Wow! It was fantastic." ---Frank Cooper, Art Deco Society of Los Angeles

*"It was a pleasure to work with you. You were perfect, enthusiastic, and really nailed her. And thank you so much for caring as much as you did." ---Richard Hilton, Director

*"Don said you have brought Barbara back to life for him. He really feels the essence of his mother in your words, movements, and smile." ---Patricia Gallery, wife of Donald Gallery (aka Marvin Carville La Marr)

*"Barbara's spirit absolutely comes through you! Her grace, presence, and humor are perfectly recreated and shared! I had chills through the laughter and tears."

*"She does for Barbara La Marr what Val Kilmer did for Jim Morrison."

REVIEWS OF MY BIOGRAPHY, BARBARA LA MARR: THE GIRL WHO WAS TOO BEAUTIFUL FOR HOLLYWOOD -

*“The ‘Girl Who Was Too Beautiful' moniker is both a blessing and a curse for Barbara La Marr's legacy. It ensures her place in the pantheon of Hollywood's most intriguing figures, but at the same time discourages modern audiences from viewing her as anything more than Roaring Twenties eye candy. Therefore, the task that Sherri Snyder has undertaken is invaluable; Snyder manages to humanize an actress who is all too often defined merely by her physical appearance and freewheeling lifestyle. Expertly researched and captivatingly written, Barbara La Marr: The Girl Who Was Too Beautiful for Hollywood manages to paint the most complete picture of La Marr's life to date. A scholarly work on Barbara La Marr was long overdue; the silent film community as a whole should be thankful that Snyder was not only up to the task, but has created a work that will serve to define La Marr's life and career for decades to come.” ―Charles Epting, editor, Silent Film Quarterly

*“Snyder's work is fresh and enthralling. Her dedication and compassion for her subject shines through. And we are richly rewarded with a truly well-written biography of a long-forgotten star.” ― Stephen Michael Shearer, author of Patricia Neal: An Unquiet Life, Beautiful: The Life of Hedy Lamarr, and Gloria Swanson: The Ultimate Star

*“Sherri Snyder digs deep into the life of Barbara La Marr, giving an in-depth look at the intelligence and talents of the ‘Girl Who Was Too Beautiful.' We see the real three-dimensional La Marr for the very first time, a thoughtful, generous, and creative woman who died much too young.” —-Mary Mallory, film historian and author (Hollywood Celebrates the Holidays: 1920-1970, Hollywoodland: Tales Lost and Found, and Hollywood at Play: Celebrating Celebrity and Simpler Times)

*“Snyder's completed manuscript is impressive in both its scope and detail . . . . A fluid and captivating narrative.” —- Christina Rice, author of Ann Dvorak: Hollywood's Forgotten Rebel

*Barbara La Marr: The Girl Who Was Too Beautiful for Hollywood, was selected by film historian Thomas Gladysz as one of the Huffington Post's "Best Film Books of 2017."